The LIRR`s Main Line serves as the central artery of the commuter rail system in Nassau and Suffolk Counties. The existing LIRR Main Line segment between Floral Park and Hicksville is comprised of two tracks, and currently serves more than 220 trains on a typical weekday. Given the volume of train traffic along this Main Line segment, it frequently becomes congested during normal rush hour. To alleviate the congestion, the LIRR is undergoing an expansion project from Floral Park to Hicksville, which includes the installation of an additional track. Our scope of work includes the design of the modification of the existing Nassau Boulevard Bridge to accommodate a third track. The Nassau Blvd. Bridge is located to the east of Merillon Station in the Village of Garden City, New York. The existing bridge has a non-standard vertical clearance of about 11`-6” and the proposed bridge will improve the vertical clearance to 14`-0” min. The existing structure consists of ballasted concrete deck through girders with separate girders for each track. The existing bridge is approximately 26 feet wide and 43 feet long superstructure span over Nassau Blvd on concrete abutments founded on shallow foundation. The existing wingwalls are also supported on shallow foundation. Project includes the design of a new superstructure to support the horizontal track alignment and the design of a new superstructure and substructure to support the third track. The proposed design includes new through plate girders with floor beams bridge, which includes the design of through plate girders, floorbeams, end floorbeams, longitudinal stringers, abutment seat width, expansion and fixed elastomeric bearings. Nassau Boulevard Bridge consists of four (4) through plate girders with a span length of about 45.5 feet and an overall bridge width of 47 feet with steel grating walkways on each side. Bridge Design Plans, Structural details & Specifications were prepared utilizing the AREMA Manual for Railway Engineering. All calculations are based on the AREMA Manual and LIRR Project specific requirements. This project also includes Load Rating Calculations per AREMA requirements – Normal Ratings and Maximum Ratings for Cooper E80 Equipment, M7 Equipment, DE30/C3 Equipment, and NYAR 286kip Freight Car. Detailed Fatigue load ratings were also calculated based on applicable stress category for girders, floorbeams, and stringers. The project also includes retrofitting of the existing substructure-abutments with Permanent Grout Tie-backs to resist heavy longitudinal loads per current AREMA requirements. Soil Tiebacks will be installed through the stem of both the west and east abutments. New precast approach slab will be constructed at the east and west abutments to relieve the abutments of live load surcharge. 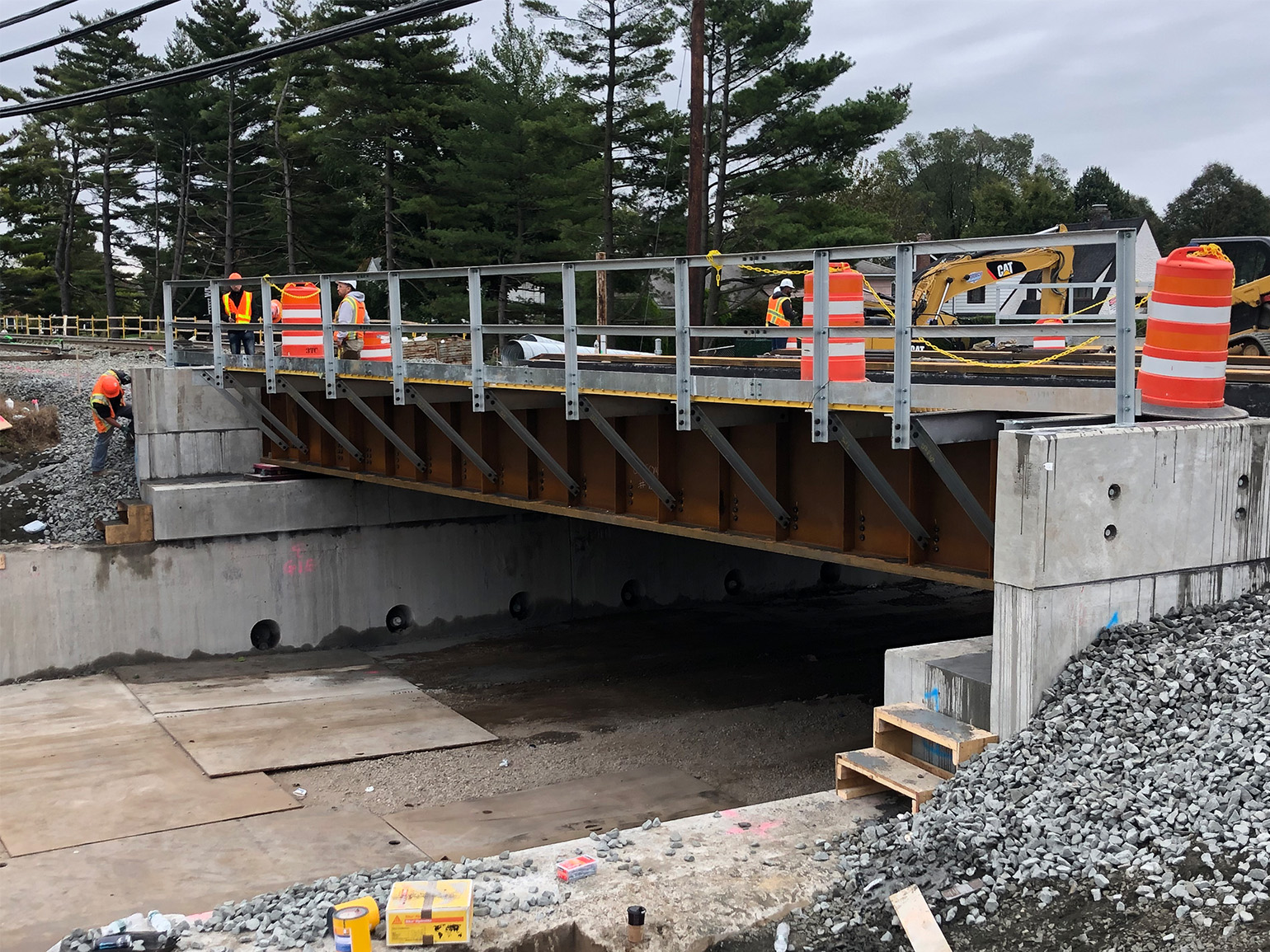